The historic fishing village of Port Isaac, on the north Cornwall coast, played the part of Portwenn in Doc Martin. Registered as a fishing village in 1338, Port Isaac has always offered the safest harbour along this part of the coast, a vital refuge from Atlantic storms. But it also provided the perfect backdrop for filming. Its plethora of holiday cottages became temporary homes for the cast and crew, and local people were used as extras. 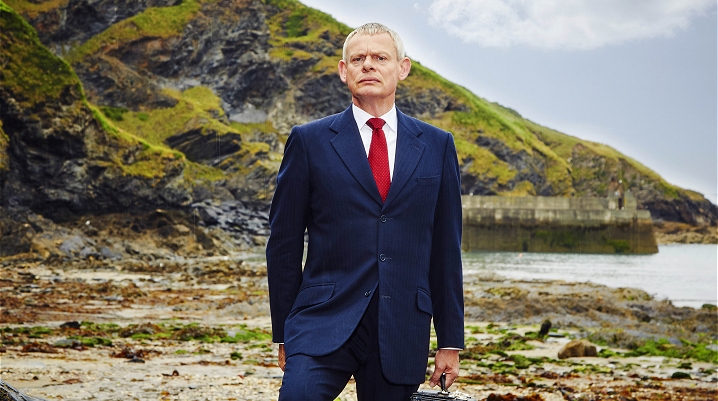 The Platt, the Cornish name for a market square, is at the heart of the village, by the harbour, and was the location for the lifeboat day gala in the first episode of Doc Martin. The Platt was transformed into a colourful carnival complete with cake stalls, merry go rounds, and a local jazz band. The Old School Hotel and Restaurant was returned to its former purpose, as Portwenn's primary school, where Caroline Catz's character, Louisa Glasson teaches. The old school, built in 1877 closed in 1976.

The exterior of the doctor's surgery is a detached cottage up a steep hill overlooking the harbour, and with stunning views out to sea.

The Golden Lion became the Crab and Lobster in Doc Martin. The interior of the 18th century building was taken over by cast and crew for several days during the shoot. The Old Drug Store, which is now a gift shop, was transformed into the local pharmacy. Ours, the coffee shop in the centre of the village, stayed open all night to keep the cast and crew supplied with cappuccinos and hot chocolates during night shoots. And the Cornish pastie shop next door did a roaring trade during the day.

The village hall was the setting for the Portwenn dance, and a farm just outside Port Isaac became Aunt Joan's smallholding. A barn on the outskirts of the village was converted into a studio for some of the interior scenes.